The secret ingredient sure ain't love....!

It started snowing this week where I am. I’m usually a fan of cool fall weather because it’s perfect tea and hoodie weather (I refer to it as “Goldilocks” weather—not too cold and not too warm), but this is ridiculous. CURSE YOU CANADIAN WEATHER.

I decided to stay warm by keeping my oven practically permanently on (it doubles as a radiator, doesn’t it?) and baking up a storm. I’m trying to make the perfect scone, but I’m running into a number of problems. The main being that I suck at baking. I don’t know how to overcome this particular problem…

I know that baking is supposed to be this relaxing, therapeutic activity. But when I set off the smoke alarm with my 2nd try at scones, and the stupid alarm was emitting this “EEEEEEIIII” that I’m sure they could hear all the way in Florida, I was thinking: “I AM NOT FRAKKING RELAXED.” Unless, of course, “relaxed” means that you’re ready to attack your oven and/or smoke alarm with an axe; if so, then I was VERY relaxed. I was a mother flipping boatload of RELAXED. Frankie wouldn't even need to say anything, I would already be there.

It doesn’t help that I always seem to run into the same problem when mixing the wet and dry ingredients together. Either there is too much dry stuff and I can’t get it to mix with what’s left of the clumpy wet stuff (WOAH! Wet stuff and dry stuff? Tone down the descriptive terms there Laura), or it’s supposed to be the consistency of actual dough, but it looks like my dough is suffering from leprosy (ie: lumpy and falling apart). When this happens, I get even more “relaxed!” If I was any more “relaxed,” I’d probably die.

I should just stick to mail. I’m not bad at mail.


This was such a great mail week! I seriously have the best penpals.

First up is the totally kooky and much beloved Julie: 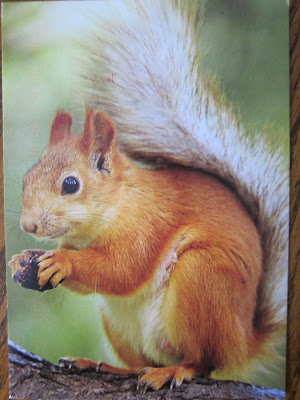 SQUIRREL!!! This postcard came with nuts and love. The love I can handle, but the nuts! WOAH! Warn a gal before you throw nuts at her (and this sentence took a weird turn so I'm just going to move on.... SQUIRREL!).

Then came Julie's rather large envelope that contained total awesomeness like Star Wars stickers, sushi (!!!) post-its, and a tea postcard. 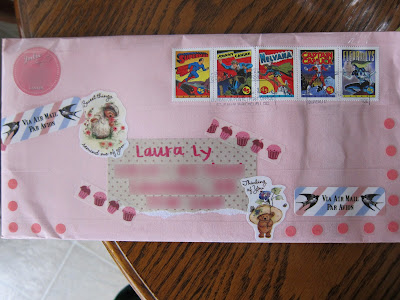 And just when I thought that it had maxed out on its awesome quotient, I noticed the velociraptor-iffic stamps it came with. 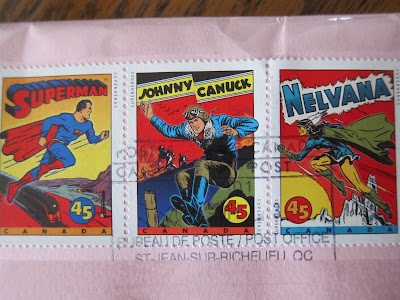 So. Many. Superhero. Stamps. I. Can't. Function. 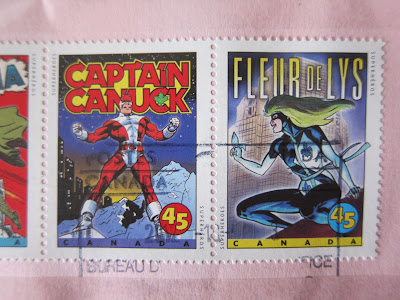 Is it considered certifiable if a person wants to roll around in a bed of superhero stamps? It is?! Oh.........

Then came a letter from Kay! I love letters from Kay. Especially when they come with CDs containing things that are both fun and educational, as well as cards decorated with glitter that I'll probably be wearing in my eyebrows all week long. Have you noticed that letters containing glitter are the gifts that keep giving? I'm constantly finding it everywhere for weeks. It's like a disco ball exploded in my kitchen. 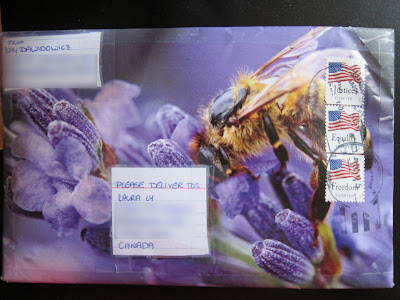 Last but not least, a TARDIS letter from Sarah! Sarah made me a Robot/Sci-Fi mix CD that is pretty awesome. The first track goes "Doctor Who, Doctor Whooooo! Doctor Who-oh, The Tardis...." I've uploaded the CD under the title: Robot Tunes. Perfect for those times when I'm feeling especially mechanical (usually M, W, F between the hours of 1:27 pm and 3:52 pm). 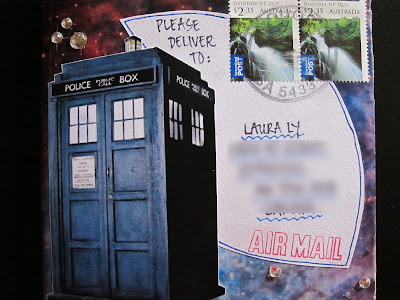 
Shit. I just realized that I'm STILL putting my moustaches upside down. Why brain, WHY?!! Maybe I should stop using moustaches and just go with circles. There is a zero percent margin for error there. 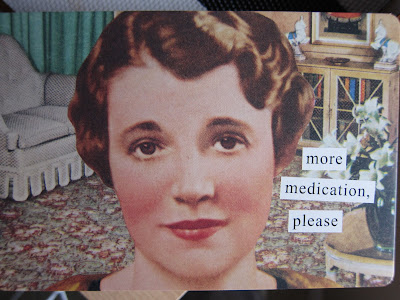 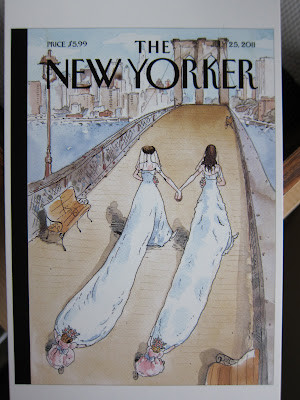 And that's it from me folks. I hope your adventures in weather and baking were much more fruitful than mine this week. Have a great week everyone.