You know, I consider myself relatively prepared for an apocalypse. Mentally, that is. And by mentally, I mean entirely in the warped world that exists just in my mind.

In real life? Eh.... not so much. I once spent a blackout trying to find candles. Only to realize hours later—after the lights had come back on, of course—that they were in a box that I used to prop up my computer screen. Because, naturally, that's where they were the most useful. Candles and computer screens go together like two peas in a not-at-all-useful pod. That is, sadly, a true story.

So I could do with a bit more practical emergency preparation in the real world, but mentally—WOAH! I could not be more prepared. This is a topic I discuss with some of my penpals quite a bit. And with every letter, we keep upping the ante. First it was zombies, robots, and aliens, now we're constructing rock solid plans against mannequin takeovers, gnome attacks, unicorn rampages, and total war against deer wearing argyle sweaters (not to be confused with deer wearing checkered sweaters—totally different game plan).

Really, there's no shortage of things that could be viewed as threatening if you think about it hard enough (and are slightly unhinged enough). Are you having a cup of tea as you read this? Oh, did that mug just move a teensy weensy bit closer to you?!!!! Who knows anymore? But I'd prepare a plan against a mug uprising Just. In. Case......You just never know when you might fall into a dimension as vast as space and as timeless as infinity.

And if the apocalypse comes, beep me. I'll be there with candles...just as soon as I find them. 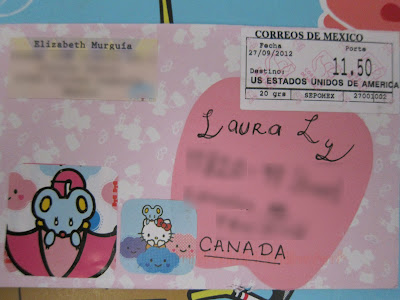 This was a letter from Elizabeth. Her first letter to me went missing, so I was quite excited when her second letter actually arrived. Except when I opened the envelope, this was inside: 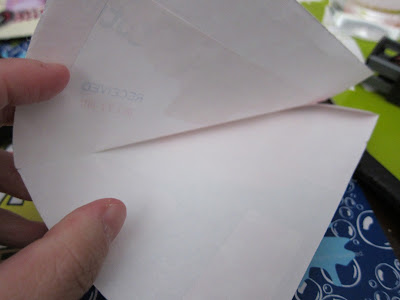 Yup, that's nadda. Somewhere between Mexico and here, the letter slipped its envelope noose and ran for freedom. Has anyone else ever recieved an empty envelope? It amazes me how I can have such bad luck with the same penpal!

And that's it from me. It just keeps snowing where I am and I think I'm slowly freezing to death in small increments. If one of my future posts abruptly ends, don't be alarmed. My fingers probably just froze and broke off.

I hope you all had a great mail week too. See you next week.