Put your right foot in..the mailbox? Then shake it all about!!

My goal is to routinely post my outgoing and incoming for the week (AKA my show and mail) on the weekend. Unlike other countries, Canada doesn't deliver mail on Saturdays (who can I talk to to change this? If I form a protest of one in downtown Edmonton, will this make a difference? Anyone want to join me?). My weekend post would then capture all the mail sent and recieved between the Monday-Friday before. However, I'm a little early with my post this week because I'm taking a trip to Calgary tomorrow for the Calgary Expo!

What's the Calgary Expo, you ask? Why, it's only the biggest geek expo this side of Canada! At this, the entire major cast of Star Trek: The Next Generation will be reuniting for the first time in 20 years!! This even includes Sir (you can't forget the Sir) Patrick Stewart!! Now, I'm not actually a Star Trek fan—I've never watched an episode and please don't tell my fellow geeks because I'm afraid they'll kick me out of the geek club—but I'm pretty damn excited nonetheless. There is going to be a Fringe panel (one of my favourite shows on air right now), and Katee Sackhoff from BSG (my favourite show of ALL TIME) is going to be there. So I figure I better get the mail business out of the way before I go catatonic with geekdom...


On a scale of cow to zebra, my incoming mail this week was a gazelle (need a translation? You can get The Dictionary to Laura's Randomness for 5 easy monthly installments of $19.99!! I'll also accept payment in the form of washi tape. Click here to find out how to purchase. We also have someone ready to take your call right now!)!!

More fan-freaking-tastic penpal ad responses. I'm starting to think that there was a huge mistake in my ad, as these wonderful letter writers seem to think I'm far more interesting than I really am. I really should have written: "My name is Laura. I spend all my hours counting the ceiling tiles in my house. After that, I watch paint dry. The most exciting part of my day is where I dress myself. Please write me." I do apologize to everyone for roping you in. But now that I've got you, I'm subjecting you to 12 page letters on a regular basis. Please see your doctor if you'd like to be inoculated against this, but there's no guarantee it'll work. I'm a persistent, hearty bastard. 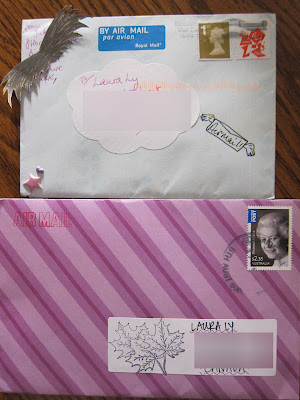 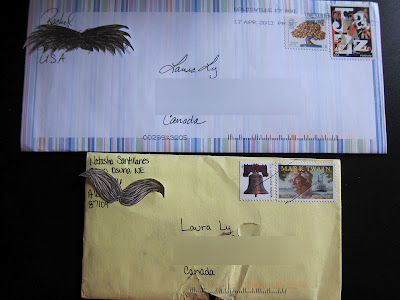 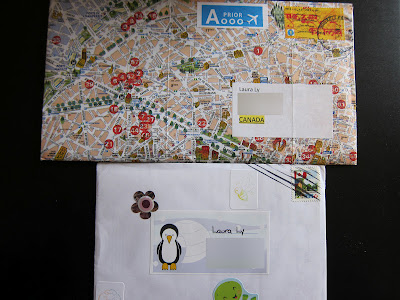 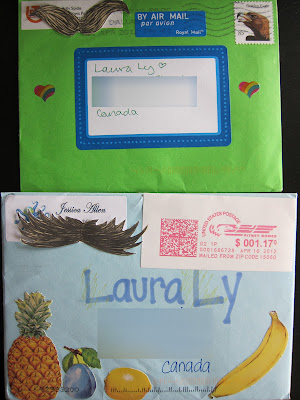 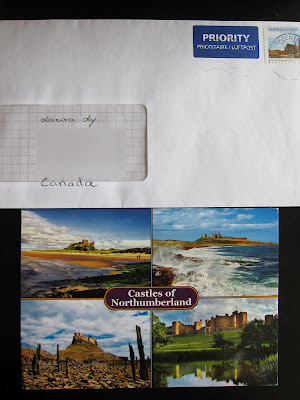 What's super exciting is that one of the letters (from Sukie in the UK) was sealed with candle wax, which made the period drama lover in me go SQUEE! Also, Sarah in Australia was so clever and included a map with her letter, outlining places and cities of importance to her: 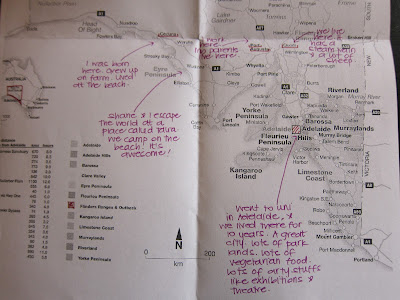 Sarah—is this map to scale? If so, your commute doesn't seem that bad then! *rimshot* [audience groans....] 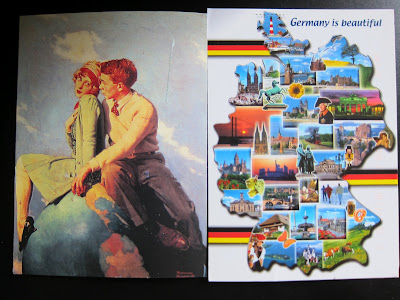 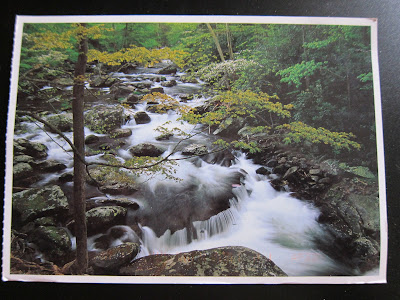 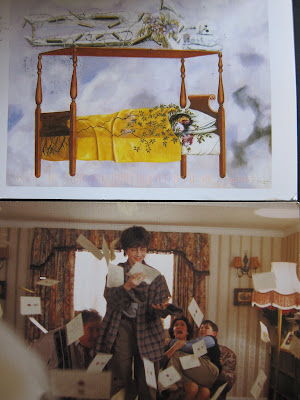 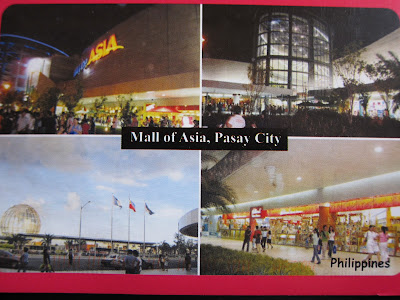 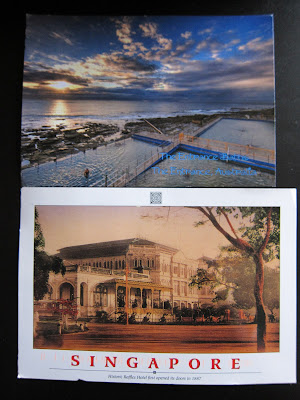 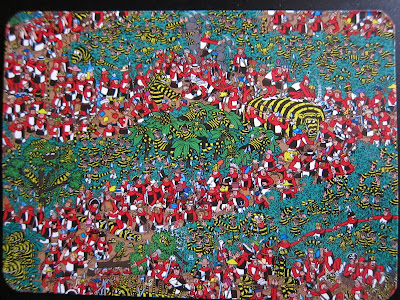 Check out this great King Lear stamp from Jennifer in the UK: 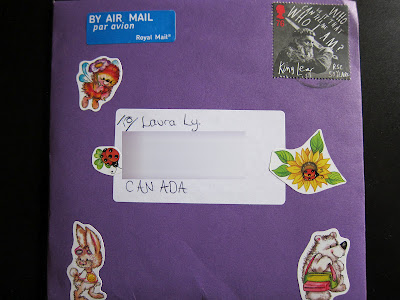 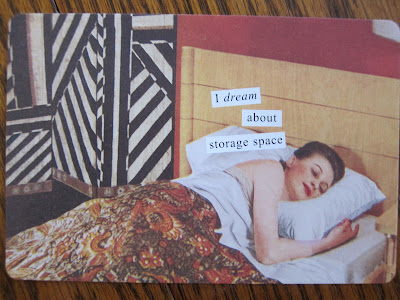 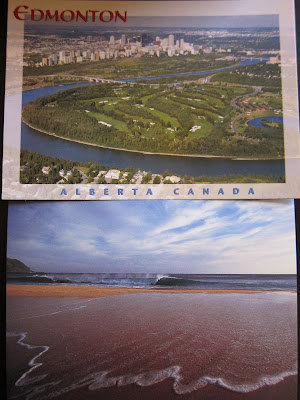 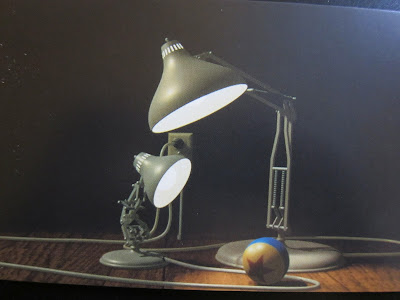 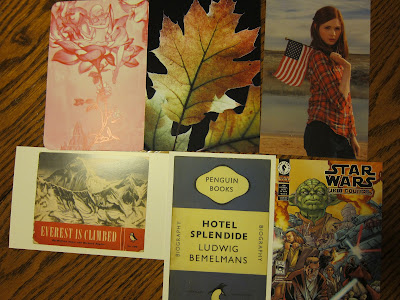 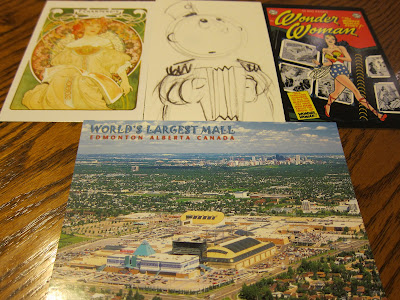 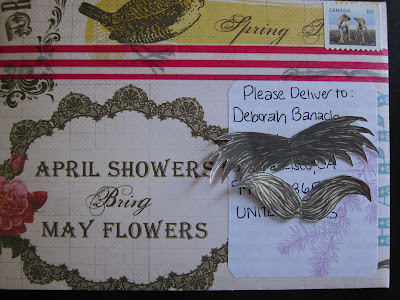 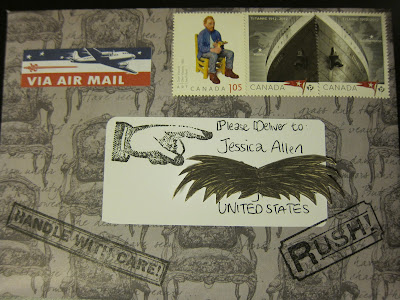 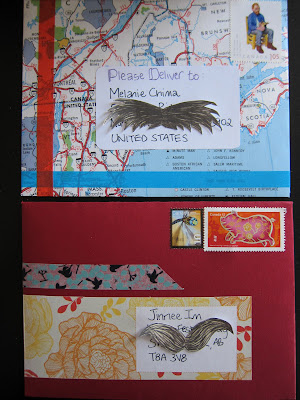 The below was for a "Weird as Hell" postcard swap, and weird as hell these postcards were! In fact, I was too shy to send one of the postcards naked through the mail [guess which one?] so I got permission from the reciever to send it in an envelope. How silly is that? Do you ever feel shy about some of the images on your postcards? 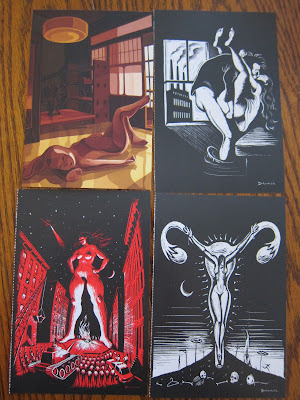 My outgoing orphaned postcard children. Central Park, don't think that I didn't see you give Edmonton a wedgie that one time..! [that sentence is so bizarre (even for me), but weirdly funny on so many levels] But I forgive you. I'll miss you both. 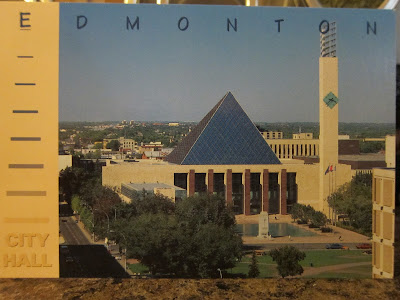 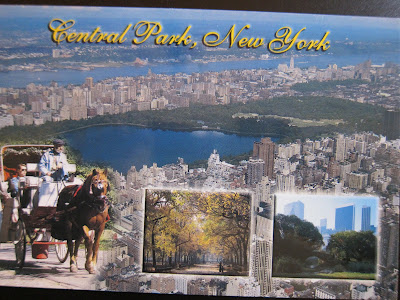 Now, I'm off! I'm hoping to convince Sir Patrick Stewart to transfer his sir-dom to me so that I can start referring to myself as Lady Laura. Ooooohhh, tell me that doesn't give you chills. No? Well, it makes me pretty darn tooting excited. Thanks to everyone for giving me a gazelle mail week, and I hope you gentle mail folk had the same!

P.S. I realized earlier this week that I don't own a letter opener. First, I don't watch Star Trek, now I don't open a letter opener. Oh man, I'll be kicked out of the only clubs that'll have me. You'd think that I would have come to this realization a long time ago, but nope, apparently I was too busy thinking of a way to fit a square peg into a circular hole—grrrrr, I'll conquer you yet. I'm really disappointed by this (the lack of letter opener, not the square peg into the circular hole thing) as I had the opportunity to get an AWESOME one shaped like a samurai sword (!!!!) during a recent stationery roadtrip. What? Don't look at me that way; it's not at all weird to take 7 hour (roundtrip) day-roadtrips, draggling your poor husband to eight stationery shops, just to buy paper. Perfectly normal.

In the absence of a letter opener, I've just been tearing into envelopes using my sausage fingers, which is the equivalent of using a rocket launcher to tweeze out a hair (OVERKILL). I'm on a mission to find a proper letter opener now and am prepared to plumb the depths of Edmonton shops to find a really unique one. If you don't hear from me for a while, send help... I probably got distracted by something pretty and then got lost somewhere....
Posted by Laura L. at 5:20 PM