You may have realized by now that most of my blog post titles are fairly random and really make little sense. My motto is "keep them guessing!" However, this one is fairly straight-forward as it's about the Orphaned Postcard Project (Did I blindside you with the obvious title? I promise it won't happen again...)

I recently discovered the Orphaned Postcard Project through a bit of happenstance. The Smithsonian Postal Museum launched a great twitter campaign titled #showandmail. Basically, people are asked to post photos of their incoming and outgoing mail and tag it with #showandmail. It's so great to see just how many of us are mail enthusiasts! Viva snail mail indeed. If you're on twitter, I encourage you to spend 5-10 minutes to take a look at the beautiful mail people recieve every day. Who knows, you might discover a future penpal or find a kindred soul to follow on twitter.

The Show and Mail campaign led me to the Orphaned Postcard Project, created by the wonderful PostMuse. Like all innovative projects I discover, my immediate thought was, "DAMN! Why didn't I think of that first?!" It's a simple concept: you "adopt" a postcard, write a memory attached to the location/scene on the postcard, and send it back to PostMuse. Easy peasy! However, most people probably adopt a postcard or two, I adopted *ahem*eight*ahem*. WHA? I like the idea of little postcard children! Did you miss the operative word in the title? ORPHANED. These postcards have no home! NO HOME!! I'm temporarily welcoming these beautiful orphaned postcard children into my home!! As an aside: I often write my blogposts as if they were sentences that I would normally say in real life (hence the blatant abuse of brackets and em dashes, which is my attempt to stem my stream of consciousness into a grammatically-correct structure). So when I use the word "home" in the above few sentences, I'm saying it exactly how Happy Gilmore would say it. Observe:

[now if you go back and re-read those sentences using the Happy Gilmore way of stressing the word "Home," it's like I'm there with you! But in the least creepy way possible. Unless of course you like that sort of thing—in that case, I aim to please!]

Anyway, back to the orphaned postcards: they better stay away from my candy if they know what's good for them, and hopefully they're potty-trained. I don't exactly have time to chase after postcards that keep leaving stamp "surprises" everywhere.... However, I'm sure I adopted well-behaved orphaned cards.

I adopted several postcards showing Alberta locations, as well as one from California and even some from England (the plan is to take them on my trip to England in August. Once I've visited the site on the postcard, I'll write my memory on it and then post it from England!). I recieved the first envelope with the Alberta cards and the lone California one today! Look at how bootiful those envelopes are! You'll see the actual postcards in a future outgoing post. 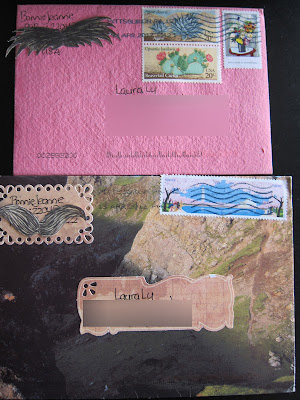 If you also like the idea of adopting a little orphaned postcard, learn how to participate in the project here, and search the database of available postcards to adopt here! It's a great project and I'm really happy to be involved.

Now I just have to figure out which memories I want to write on my adopted cards. Of course I couldn't be concise if my life depended on it. So trying to write a nice memory (pithy preferably) when it takes me 546849 words just to say, "Hi, how are you," is going to be a problem. I'm considering only writing every 7th word of the entire memory. Something like, "Hi, Edmonton, ate, underwear, clown, Ryan Gosling, hamstring, whipped cream, donkey, hahahaha!" Now, wouldn't you want to know that memory....
Posted by Laura L. at 8:16 AM

Email ThisBlogThis!Share to TwitterShare to FacebookShare to Pinterest
Labels: postcards